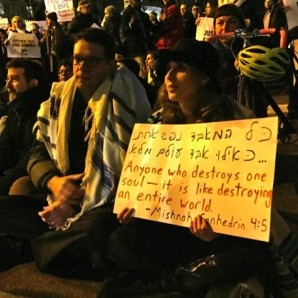 Four prominent rabbis, Rabbis Sharon Kleinbaum, Jill Jacobs, David Rosenn and Shai Held joined thousands in protesting the killing of Eric Garner. They recited the Kadish, the Jewish mourning prayer, for more than twenty victims of police violence. They would be arrested later that night. “Rabbis and all Jews need to stand up and say that every single person is a creation in the divine image — that black lives matter,” Jacobs said. “We put our bodies on the line to show how crucial it is that the systems meant to protect us do protect all of us.”