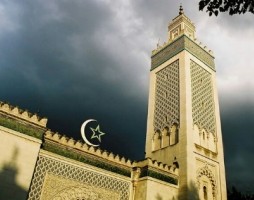 Muslim Frenchmen save Jews during the holocaust

During the holocaust, France was home to thousands of Jews and Muslims from North Africa. They spoke Arabic, held typical North African traditions, similar dietary restrictions,  spoke the same dialect, prayed in a similar fashion, had the same names, and possessed physical resemblance. Against this backdrop, stood the Grand Mosque of Paris, a tiled, walled fortress the size of a city block, which served as a place to pray, but also as a place of sanctuary where visitors could eat, relax, and bathe during the Vichy occupation of France. Given the similarities between North African Jews and Arabs, French Algerian partisans were able to provide assistance to Jewish families by hiding them in the mosque, while Si Kaddour Benghabrit (the mosque’s imam and founder) issued them with Muslim certificates of identity. With these papers, between 500 and 1,600 Jews were able to escape Nazi France and seek refuge in nations where they wouldn’t face certain death.