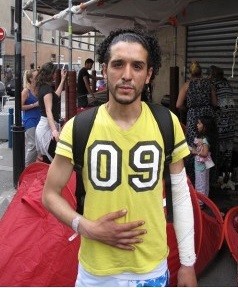 Mohsen an Undocumented immigrant and a hero

Mohsen, a 26 year-old illegal refugee from Tunisia, saved at least ten of his neighbors caught in a violent blaze that killed three people in an old building in Paris suburbs. The death toll would have been a lot worse without the courage of Mohsen, who risked his life to save the lives of the building inhabitants. Through the dense smoke, he warned everyone he could reach and notably evacuated, via a scaffolding, a mother and her two children.
He suffered several burns on the face and body.