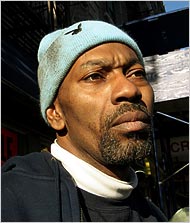 Man jumps to rescue a stranger on Subway Tracks

Wesley Autrey, a 50-year-old construction worker from New York City, was waiting for the downtown train at 137th Street and Broadway in Manhattan. Autrey noticed that, nearby, a man collapsed onto the tracks and started convulsing.  As the headlights of the No. 1 train appeared, Autrey had jumped onto the tracks and covered the man.
Five cars rolled overhead before the train stopped. “We’re O.K. down here,” Autrey called out from underneath the train. Refusing medical attention himself, Autrey went to visit the man he saved, Mr. Hollopeter, in the hospital before heading to his night shift. “I don’t feel like I did something spectacular; I just saw someone who needed help,” Autrey said. “I did what I felt was right.”