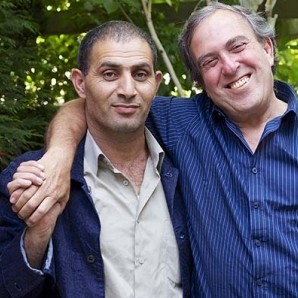 Israeli and Palestinian father who got their child killed become brothers

When my daughter was killed, my first reaction was rage,” says Rami Elhanan the israeli father who’s daughter, Smadar, was blown up by a suicide bomber in central Jerusalem. “I knew that killing someone would not bring her back, and I knew that causing pain to someone else would not ease my pain” so Rami’s search for answers led him to the Parents Circle-Families Forum (PCFF), a group of Israelis and Palestinians who believe that peace will not come to the region through political posturing but only through ordinary people getting to know and trust one another. Bassam the Palestinian father lost his daugnter, Abir who was killed, shot in the head outside her school with a rubber bullet fired by one of Israel’s border police.
Rami recalls: “When Abir was shot, it was like losing my own daughter again. I was in complete despair, overcome by frustration and anger. I asked Bassam, ‘What are we going to do now?’ and he said to me, ‘Well, God is testing us.””If I killed an Israeli or 100 Israelis it would never bring Abir back. It would just create more victims, and then more killers. We have to break the circle of violence.
“We decided to lay down our weapons. We discovered a more effective weapon is to talk to each other and to work together. We started to trust each other; then we became friends; then we became brothers.
“You have to use your pain, your tragedy, in a different way. One Israeli soldier killed my daughter. But afterwards more than 100 ex-soldiers came and made a garden in the school yard in her memory. It sent a very strong message to the local community.”

Israeli had his brother killed by Hamas, Now He Helps Sick Palestinians
Muslims and Jews pray together to plant seeds of hope and possibility