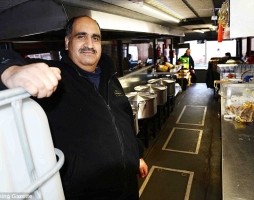 Ghafoor Hussain, a British grandfather, bought and converted a bus into a travelling kitchen to feed refugees across Europe. His canteen would provide warm meals for up to 15,000 refugees per day. Mr Hussain, along with volunteer M. Ghafari, planned to go to Serbia and Macedonia during the Christmas season and where they will be joined by more volunteers. The idea for the travelling canteen arouse in Hussain following a trip he made to feed refugees in Austria, Slovenia, and Croatia, where he observed they were mostly provided cold food.