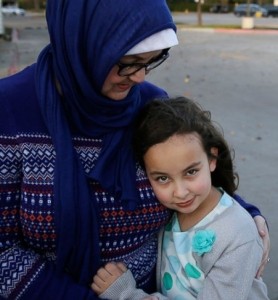 As anti-Muslim rhetoric permeates all levels of national discourse, many Muslim Americans become increasingly frightened. One of them in Melissa Chance Yassini, who posted about her daughter’s fears of being deported from the U.S. following Trump’s proposal to ban all Muslims entering the country. “She had began collecting all her favorite things in a bag in case the army came to remove us from our homes. She checked the locks on the door 3-4 times.” Wrote Yassini on Facebook. Horrified by the story, Army veteran Kerri Peek took to social media and posted a picture of her in uniform along with the caption #iwillprotectyou. The hashtag immediately became viral as more and more veterans and service members posted their pictures along with the caption to show Muslim American children that they stand with them.